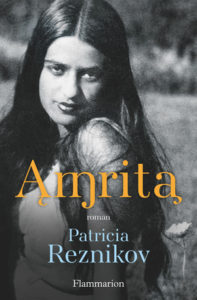 A few weeks ago I  received an email
from a friend in India: ˋHave you
come across ´Amrita’ , a novel in
French by Patricia Reznikov, just
published this year by Flammarion?
’. I was intrigued as I have been
working since many years on the
unique, artistic œuvre of exactly the
same Amrita . Amrita is  Amrita
Sher-Gil , a pioneering painter and
feminist,  who was born in 1913 in
Hungary and died tragically in India
in 1941, aged 28. The figure of
Amrita and her work became in
recent years immensily popular in India and beyond. Just like
Patricia Reznikov , Amrita studied at the Ecole des Beaux Arts in
Paris. Her exceptional painting skills won her a prize and
immediately  many fans at the Ecole . After 5 years in Paris,  the
indian- Hongarian family Sher-Gil returned in 1934 to India where
she became one of the inventors of modern Indian art. Throughout
her work Amrita loved depicting women in private moments, in her
later work expressing the indolence and loniless of Indian women
living in the rural areas. In much the same way as her contemporary
Frida Kahlo , Sher-Gil used her ambiguities of nationality and
sexuality, to question what and how an Indian artist, let alone a
female one, might be. Sher-Gil herself knew exactly what was at
stake when she declared in 1938 :´Europe belongs to Picasso,
Matisse and Braque and many others. India belongs only to me’
thereby boldly outlining her ambition to be the first truly modern
Indian painter. One can easily see why Reznikov is fascinated by the
life and times of Amrita Sher-Gil. She is not alone, also India’s most
important filmmaker Mira Nair is preparing her view on the
revolutionary role of Amrita, as an encouragement for thé
émancipation of  Indian women. It is interesting to note that in 2022
exhibitions are planned of the unique œuvre which Amrita left
behind, in Qatar and South Africa. Indeed, thé legacy of Amrita
Sher-Gil lives on. The indepth  research, rich interpretations and
story telling of Reznikov make the exceptional personality of Amrita
come alive and makes clear that a large exhibition especially in Paris
is long overdue. That’s what my friend, Amrita’s nephew ,leading
contemporary Indian artist Vivan Sundaram,in his mail was indeed
hinting at.